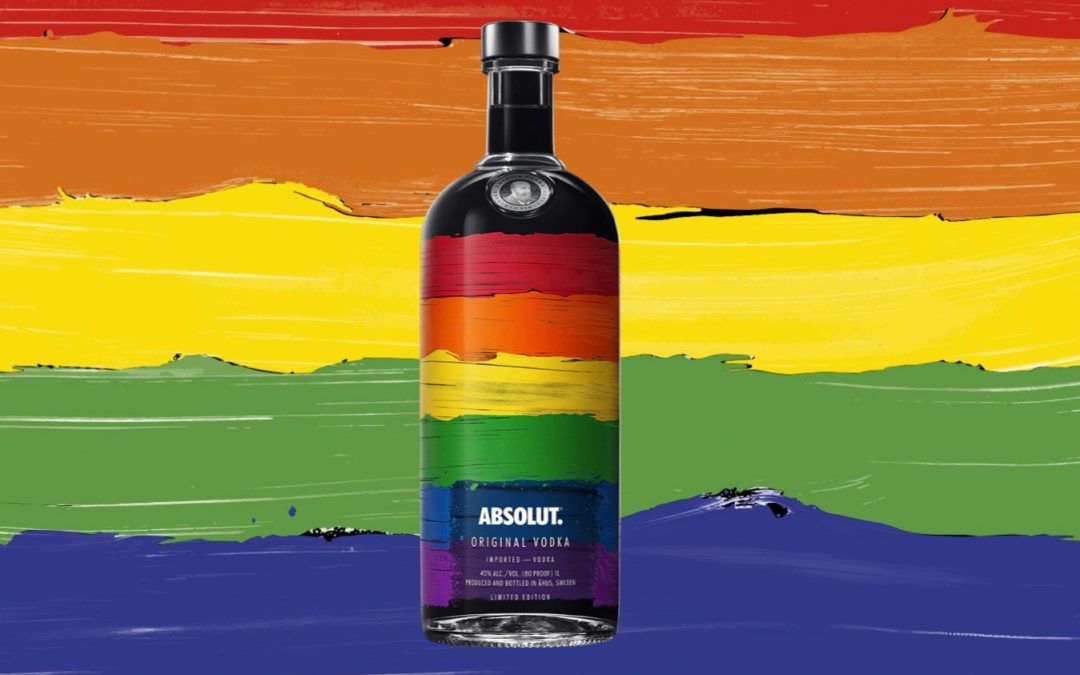 It’s easy to view these gestures through a lens of cynicism – that they’re a way for companies to generate positive media coverage while they continue to pay their workers the minimum wage or build drones. With 63% of Americans now supporting gay marriage, a company that celebrates LGBTQ pride is likely making a sound marketing decision that’s not particularly controversial.

But back in the 1980s and 1990s, when a much lower percentage of Americans were sympathetic to the cause, only a handful of companies stuck out their necks in support of LGBTQ rights. Which companies did so? And what spurred their support for LGBTQ equality? Those are questions law professor Carlos Ball explores in his new book, “The Queering of Corporate America,” in which he details how, over the course of 40 years, gay rights activists and corporations went from adversaries to partners.

In an interview, which has been edited for length and clarity, Ball explains why corporations were among the first targets of gay rights activists and why many of these same corporations eventually embraced their role as LGBTQ allies. But he also points to the limits of corporate advocacy.

In the 1970s, what could happen to you if a company found out you were gay?

As part of its application process, Coors, for many years, attached candidates to a lie detector test and asked them a whole range of questions, including whether they had ever had a same-sex relationship. Pacific Bell, which back then was the largest private employer in California, claimed that employing openly LGBTQ people would put its customers, employees and reputation at risk.

If you were fired for being gay, you would have had absolutely no legal remedies available to you, unless you lived in a handful of very liberal municipalities that had enacted anti-discrimination ordinances.

Even today, there are about 30 states in the U.S. that don’t explicitly prohibit discrimination on the basis of sexual orientation and gender identity. And the question of whether federal law – Title VII of the Civil Rights Act of 1964 – prohibits employers from discriminating on the basis of sexual orientation or gender identity is actually before the U.S. Supreme Court right now.

How did some of the earliest activists bring attention to the issue of LGBTQ rights in the workplace?

They simply didn’t have the resources or people power to try to pressure large numbers of big companies, so they had to pick and choose which companies to target. Groups like the Gay and Lesbian Task Force, as it was then known, sent out a bunch of letters asking corporations about their treatment of sexual minorities.

The vast number of corporations refused to answer. But then you had some that replied by saying, in effect, “We do discriminate, and we don’t think there’s anything wrong with that. We don’t think our employees or our customers want to interact with openly gay people.”

Pacific Bell was one of the companies that wrote back saying, essentially, “We discriminate against gay people and we’re proud about that.” And so they became, not surprisingly, one of the first targets of LGBTQ activism aimed at large corporations. There were street demonstrations, meetings with San Francisco officials, letter-writing campaigns – all targeting Pacific Bell for its overt homophobia

The activism worked. By the mid-1980s, Pacific Bell was on its way to becoming a model corporate citizen on LGBTQ rights issues, in particular when it came to how it responded to the AIDS epidemic.

Large companies spend millions of dollars marketing their brands. Anything that potentially tarnishes those brands, they pay attention to.

And activists made enough noise and got enough attention that executives made, in some ways, rational business decisions. They realized the negative publicity wasn’t good for their bottom line.

But I think, as the activism continued, executives were also persuaded that supporting LGBTQ equality was the right thing to do. They came to accept the basic argument that their LGTBTQ employees were of equal merit and of equal worth as their heterosexual employees.

Now, this didn’t happen overnight. And it didn’t happen, by any means, at all companies. But it’s a trend that starts in the early 1970s and, as the activism grows, becomes more pronounced as the decades went on.

Why did activists target corporations instead of politicians?

Back in the 1970s and 1980s, it was extremely difficult to persuade a majority of legislators and voters to support LGBTQ civil rights laws. You simply don’t have to convince as many people when you are trying to persuade a company to adopt LGBTQ-friendly policies. All that it really takes is persuading a handful of top executives.

I think market forces also played an important role. First, by the time we get to the late 1980s and early 1990s, progressive consumers are starting to want to spend their dollars on goods and services provided by companies that reflect their values.

And second, I think having these policies in place allowed companies to attract and retain the most qualified employees. An LGBTQ job applicant who had the choice between two companies, one of which offered domestic partnership benefits and one that didn’t, was likely to go with the company that offered the benefits, because that was a signal that the company supported equal rights and treatment.

At the same time, you point to this phenomenon of “corporate schizophrenia.”

Right. Take Philip Morris. The company donated large sums of money to groups like the American Foundation for AIDS Research. But – and I guess this is where the schizophrenia comes in – they were also financially supporting hard-right, homophobic politicians like Senator Jesse Helms, who, at one point, actually called for the quarantining of people with AIDS.

And while corporations deserve a lot of credit for being an important part of the coalition that resisted the transgender bathroom bill enacted by the North Carolina legislature in 2016, many of these same corporations were funding the Republican elected officials who wrote and supported that law.

How did corporations respond to the AIDS crisis in the 1980s?

I would say that the overall track record of corporate America during the early years of the AIDS epidemic was terrible. Like most important and influential institutions in the U.S., large companies responded to AIDS with a toxic combination of prejudice and neglect.

The vast majority of corporations either implemented actual discriminatory policies – like placing health insurance reimbursement caps of US$5,000 for AIDS-related conditions – or allowed discrimination to take place by looking the other way.

However, there was a handful of corporations – for example, Pacific Bell, Bank of America and Westinghouse – that decided they couldn’t ignore the issue any longer. Like many large companies, they had employees who were so paranoid or homophobic that they refused to work alongside anybody who was gay, because the assumption was that if you were a gay man, you were HIV-positive. Large companies were getting many requests for transfers. They were also witnessing employees walking out of workplaces, en masse, when an HIV-positive employee was allowed to return to work after receiving medical treatment.

But rather than dealing with these problems on an ad-hoc basis, or by siding with their homophobic employees, executives at some corporations looked into the issue, consulted with public health experts and basically decided that it didn’t make sense to treat HIV-positive employees any differently from how they treated employees who had cancer or heart conditions.

It seems so obvious today, but one executive for Pacific Bell said, “Our employees with AIDS are sick, and we don’t fire our sick employees.” In 1985, that mattered. It was a simple statement of humanity, and it made a big difference.

In doing my research for the book, I was surprised to learn that a handful of large businesses were the earliest powerful institutions in the U.S. to respond to AIDS in sensible and humane ways. Before government, before unions, before universities, before many religious organizations, these companies took the lead on AIDS issues.

Companies are usually loath to publicly wade into polarizing political issues. Why, by the 21st century, did so many publicly take a stand in favor of marriage equality?

I think the 30 years of activism aimed at corporations that preceded that public stand made a huge difference. By the 21st century, LGBTQ rights issues were no longer new issues for corporations.

There were about eight Fortune 500 companies that provided domestic partner benefits in 1993. By 2001, the number was over 100. So this revolution was already taking place inside corporate America. Executives and corporate board members were learning that LGBTQ equality measures were good for their companies. But they were also learning that true equality was not possible unless the government itself stopped discriminating.

Large companies had adopted domestic partner benefits, they had adopted these non-discrimination policies, and there had really been no downside for them. Sure, some socially conservative groups were upset and there were a couple of boycotts called by right-wing organizations. But those really went nowhere.

By the time the same-sex marriage issue reached the Supreme Court, hundreds of corporations joined activists to ask the justices to recognize a constitutional right to marriage equality. And this had a tremendous political and legal impact. After all, these were not radical left-wing organizations that were making this demand. What can be more mainstream than Procter & Gamble and General Electric?

What are some of the limits of this public-facing, corporate activism?

That’s a very important question. Large corporations have certainly contributed to the expansion of LGBTQ equality in the United States and have, in the last few years, served as an important bulwark to protect those gains from conservative backlash.

That being said, nothing in the book is intended to suggest that corporations are always on the right side of disputed policy issues. There’s a whole plethora of positions that some large corporations take that are problematic from a progressive perspective, whether we’re talking about labor or environmental or taxation issues.

You’ll also see corporations be supportive of gay rights in the U.S. but then refuse to criticize foreign governments in other countries where they do business for their anti-LGBT laws and policies.

It seems like the gay rights issue is a lot easier for companies to publicly support, compared with other issues, like economic inequality.

Sure, in some ways, LGBTQ rights is an easier issue. But it wasn’t always easy, right? It became easy as a result of 40 years of activism.

You know, this book is being published at an interesting time. The country and corporate leaders have been having this broader conversation about the role of large corporations in American society.

We have the statement by the Business Roundtable over the summer about how corporations need to not just look out for the interests of their shareholders but also their employees, customers and the communities where they’re located. And so we’re starting to see – on issues like gun control, on immigration reform – corporations take more public stances, sometimes supporting progressive policy positions.

I find it kind of promising that there’s this bigger conversation that we seem to be having about the role and responsibilities of companies and large corporations in our democracy. And I’m hoping that this book can be a part of that conversation.

This article is republished from The Conversation under a Creative Commons license. Read the original article.