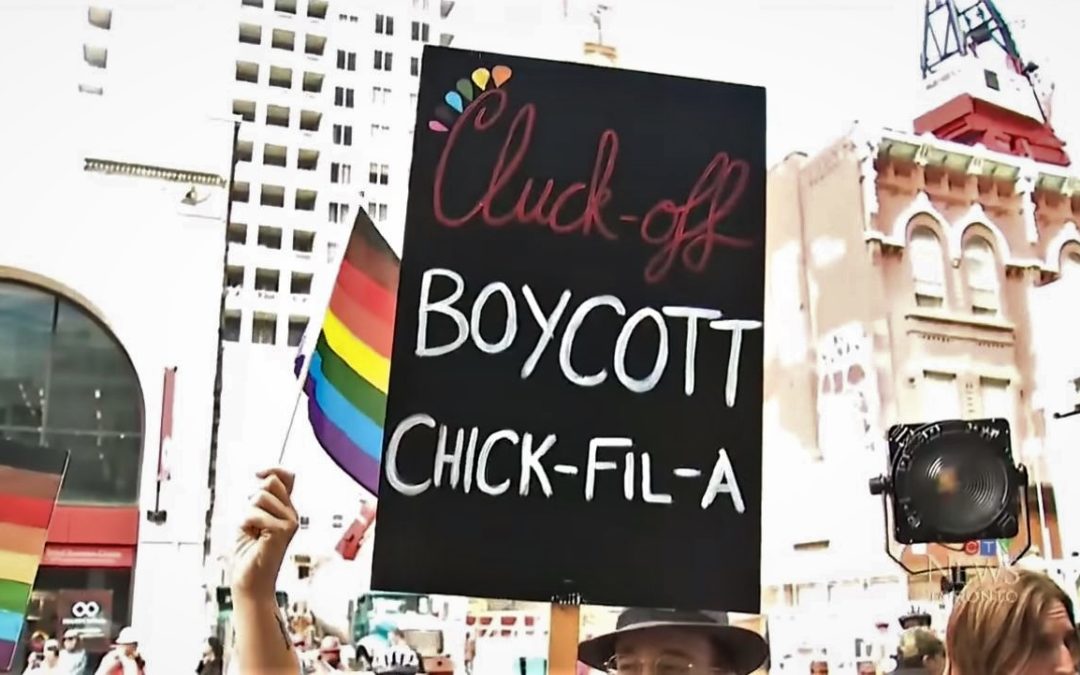 Chick-fil-A announced on Monday that its charitable foundation will no longer donate to two Christian groups that have long opposed same-sex marriage, a move that led to scorn from conservatives like former Arkansas Gov. Mike Huckabee, who called the decision a “surrender to anti-Christian hate groups.”

The fast-food chain’s foundation, the Chick-fil-A Foundation, donated more than $1.8 million to The Salvation Army and the Fellowship of Christian Athletes, according to 2017 tax filings.

The Fellowship of Christian Athletes is a religious organization that seeks to spread an anti-LGBTQ message to college athletes and requires a strict “sexual purity” policy for its employees that bars any “homosexual acts.” Paul Anderson Youth Home, a “Christian residential home for trouble youth,” teaches boys that homosexuality is wrong and that same-sex marriage is “rage against Jesus Christ and His values.”

The Salvation Army has a long record of opposing legal protections for LGBTQ Americans and at the time of the donations had a written policy of merely complying with local “relevant employment laws.” The organization’s website has since changed to indicate a national policy of non-discrimination based on sexual orientation and gender identity.

“We made multi-year commitments to both organizations and we fulfilled those obligations in 2018,” a spokeswoman for the fast-food giant told Reuters.

The representative added that the foundation plans to focus its giving on “education, homelessness and hunger” in the future.

The spokeswoman declined to say if the move was in response to protests led by LGBTQ activists that have targeted the chain in recent years for its charitable donations and CEO Dan Cathy’s public comments opposing same-sex marriage.

She told Reuters the move was “made to create more clarity.”

The decision by the family-owned chain, whose CEO Dan Cathy said earlier this year that he promised his father he’d uphold Christian values and never open the chain’s restaurants on Sundays, was met with opposition from conservatives online.

He said in a later tweet that the fast-food chain “betrayed loyal customers” for money and added that he regrets “believing they would stay true to convictions of founder Truett Cathey.”

The sad message of @ChickfilA is quite clear- they surrendered to anti- Christian hate groups. Tragic. Chick-fil-A To Stop Donating To Christian Charities Branded &#8216;Anti-LGBT&#8217; https://t.co/o93PfaaS04

In Aug 2012, I coordinated a national @ChickfilA Appreciation Day after they were being bullied by militant hate groups. Millions showed up. Today, @ChickfilA betrayed loyal customers for $$. I regret believing they would stay true to convictions of founder Truett Cathey. Sad.

A number of other conservatives also blasted the company over its decision.

The LGBT bully mob is unquestionably the most powerful mob in America today. Everyone bends the knee or risk their wrath. Makes me freaking ill. https://t.co/UX8mjvFZ57

Correct. And now my attitude toward @ChickfilA is “meh.” It’s just like every other corporation that ultimately capitulates. Sundays not far behind? https://t.co/eYvMIXm88g

Shame, shame on you, @ChickfilA. You are the 3rd most successful fast food franchise in the US. You had no reason to capitulate. But you did. Yes, shame on the progressive bullies too — yet the greater shame is yours, Chick-fil-A, you cowards. https://t.co/eTfALNMUz4

The move was met with praise by some LGBT advocates, including GLAAD’s director of campaigns and rapid response, Drew Anderson.

“If Chick-Fil-A is serious about their pledge to stop holding hands with divisive anti-LGBTQ activists, then further transparency is needed regarding their deep ties to organizations like Focus on the Family, which exist purely to harm LGBTQ people and families,” Anderson said in a statement Monday.

LGBT rights campaigner Scott Cuthbertson telling Reuters that “there is always space for people to change their minds and respect LGBT+ equality.”

“We don’t do anyone any justice by bearing anyone any grudges,” he said, adding: “If they want to be trusted by our community, they have to show that our rights are not up for debate.”