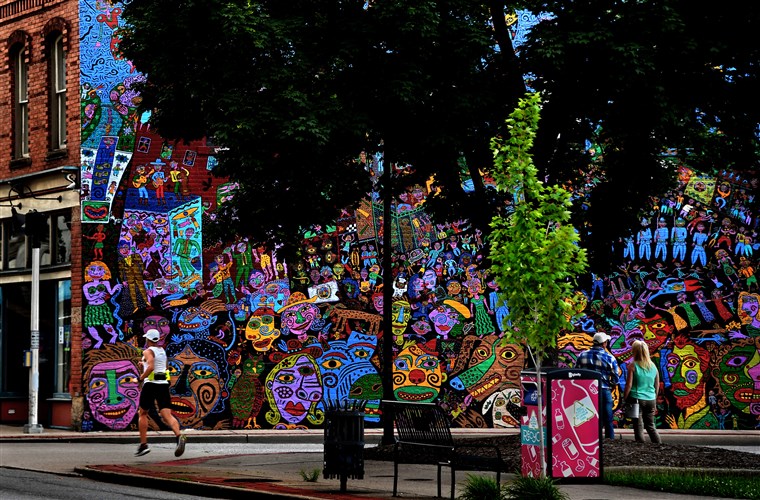 While large cities in blue states — like New York and San Francisco — are well known for their LGBTQ inclusivity, accepting environments can now be found across the country, even in some unexpected places.

The Human Rights Campaign’s annual Municipal Equality Index rated more than 500 cities and towns based on how inclusive their municipal laws, policies and services are of the LGBTQ people who live and work there. Each municipality was rated on a scale of 0 to 100 based on 49 different criteria including nondiscrimination laws and “city leadership’s public position on equality.”

This year’s report heralded 88 cities with a perfect score of 100, and many of the index’s high-scoring municipalities can be found in states not typically thought of as being inclusive to lesbian, gay, bisexual, transgender and queer people.

Here are 11 small cities (less than 200,000 residents) in red states (those that haven’t voted for a Democrat for president in the 21st Century) that scored at least an 80 on HRC’s Municipal Equality Index.

The Midwestern town is home to the University of Missouri and has a bustling nightlife scene with a multitude of gay-friendly spots. The city’s MEI score has risen sharply since 2015 when it received a 74, in large part due to city initiatives like the hiring of a LGBTQ liaison to its police department.

For six years, representatives in the mountain state of Montana fought to decriminalize consensual same-sex relations, which was formerly classified as a felony. The law was ruled unconstitutional in 1997, and Missoula has continued to advocate for the equal rights of its LGBTQ citizens since. Last year, the town unveiled a rainbow crosswalk that was planned by Empower Montana’s youth program, Youth Forward.

After Brookings received a score of 12 out of 100 in 2013, local leaders embarked on a multiyear mission to bump their rating to 100. It wasn’t until 2018, when the town adopted a nondiscrimination ordinance, that it finally achieved the coveted score. Brookings is an outlier in South Dakota, where the average MEI score is 31, well below the national average of 58.

Since Huntington was first placed on the index in 2012, the small town has more than doubled its MEI score. Aside from anti-discrimination ordinances, the city also launched the Open for All campaign, which encourages businesses to post a sticker that signifies their support of the LGBTQ community. The Human Rights Campaign called the town a “shining beacon of hope” in a part of the country not known for LGBTQ inclusivity.

Norman, home of the University of Oklahoma, became the first city in the conservative state to pass a nondiscrimination ordinance for LGBTQ people. Norman’s progressive policies toward gay residents is evident in it’s index score, which is 30 points above the second-highest ranked Oklahoma city in the index.

The capital and most populous city in West Virginia has moved to improve the lives and rights of its local LGBTQ community. In May, Mayor Amy Shuler Goodwin announced the creation of the city’s first LGBTQ working group, which will develop anti-bullying policies and LGBTQ-awareness training within the city.

Nestled next to ponderosa pine forests and mountain ranges, Flagstaff is particularly inclusive to the LGBTQ community. The city is home to Pride in the Pines, an annual LGBTQ celebration that has featured neon dance parties and performers from “RuPaul’s Drag Race.”

Juneau is home to the Southeast Alaska LGBTQ+ Alliance, also known as SEAGLA. The group began meeting in 1980 and offered a safe space to same-sex couples, with events that included dance parties, solstice celebrations and potlucks. In 2014, SEAGLA planned Juneau’s first pride event, and the organization has continued to meet and advocate for the LGBTQ community since it’s inception.

Kansas made strides toward equal protections this year, with the state’s MEI score increasing by 12 points. Manhattan is the second-highest rated city behind Overland Park, a much larger suburb of Kansas City. Kansas State University is in Manhattan and was recently ranked as one of the 25 most LGBTQ friendly universities in the U.S. by Campus Pride.

The city’s historic cobblestone streets are a safe haven for the LGBTQ community, with year-round celebrations that extend far beyond pride week. The city holds an annual LGBTQ Wedding Expo, where spouses-to-be can connect with wedding professionals.